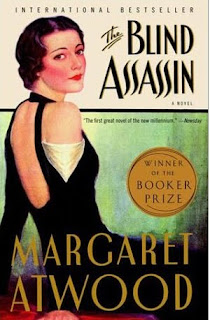 The Blind Assassin opens with these simple, resonant words: "Ten days after the war ended, my sister Larua drove a car off a bridge." They are spoken by Iris Chase Griffen, sole surviving descendant of a once rich and influential Ontario family, whose terse account of her sister's death in 1945 is followed by an inquest report proclaiming the death accidental. But just as the reader expects to settle into Laura's story, Atwood introduces a novel-within-a-novel. Entitled The Blind Assassin, it is a science fiction story improvised by two unnamed lovers who meet in digy backstreet rooms. When we return to Iris, it is through a 1947 newspaper article announcing the discovery of a sailboat carrying the dead body of her husband, a distinguished industrialist.

What makes this novel Margaret Atwood's strongest and most profoundly entertaining is the way in which the three wonderfully rich stories weave together, gradually revealing through their interplay the secrets surrounding the entire Chase family- and most particularly the fascinating and tangled lives of the two sisters. The Blind Assassin is a brilliant and enthralling book by a writer at the top of her form.

This is the second Margaret Atwood book that I've read. The first was Alias Grace.  I liked Alias Grace  a lot but I really liked The Blind Assassin... especially towards the end.

The Blind Assassin is mostly Iris Chase Griffen's reminiscence of her past. Iris was the daughter of an important businessman, who had little time for his children. Iris had a younger sister, Laura, who she felt responsible for taking of during their childhood. The dynamics of Chase sisters childhood is a sad story of a neglect and detached emotional relationships.

Within Iris's present and her past, the reader is also given excerpts of a book, The Blind Assassin. Personally, I loved The Blind Assassin excerpts. They were very imaginative. Once I got a bearing of the different stories, I really got into each of them and wanted to know how it turned out for all of the characters. I won't say more because I don't want to give away any of the endings.

By the end of the book, I just felt pity for all of the characters and their lives. I wanted them to have much more than they had gotten in life. The Blind Assassin is a beautifully narrated book that is emotional and poignant. 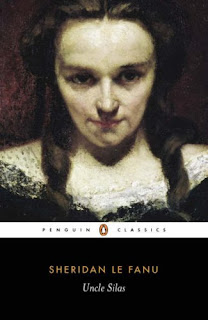 Synopsis:
From the moment that Madame de la Rougierre is hired as governess to the young, naive Maud Ruthyn, a dark cloud of foreboding hangs over the entire household. A liar, a bully and a spy, Madame eventually leaves, taking her dark secret with her. But, unhappily for Maud, that is not the last of Madame de la Rougierre. For when Maud is orphaned she is sent to live with her mysterious Uncle Silas, a man with a scandalous- even murderous- past, and encounters Madame once more. This time her sinister role in Maud's destiny will become all to clear. With its world of spirits, locked cabinets, kidnapping and past secrets that spill into the present, Le Fanu's shocking novel of sensation is a chilling and groundbreaking psychological thriller.
My Review:
I'm torn how to rate Uncle Silas. I give it an A for atmosphere and writing but a B-/C+ for plot. Right from the beginning of Uncle Silas, the reader knows that the are reading a classic Gothic novel. The young protagonist, Maud, is naive and isolated from the world. She lives relatively alone, with only her distant father and a few servants. In order to remedy Maud's education, her father hires a governess, who turns out to be cruel and mad.
Shortly after convincing her father to fire Madame de la Rougierre, the governess, Maud's father dies. Maud then has to follow her father's last instructions, which include communicating with a seemingly-creepy man, and then following the instructions in his will. Maud's father instructs that Maud is to be under the care of his brother, Silas. Silas is a reclusive man with a rumored past... rumors which include murder.
It's during this time when the plot seems to falter. The middle of the book had very little action, and what did happen didn't really seem to build up to the conclusion at all. It may have let the suspense build up since the reader knows something bad will happen but doesn't know what or who will be the cause of it. Uncle Silas is full of seedy characters- some who turn out good and others not so good.
The conclusion is excellent. Most of the loose threads are tied up and the reader can finally breathe easily.
I recommend this book for those who like classic books with mystery and gothic aspects but also the patience to read through some tedious passages.
P.S. Isn't the picture on the cover creepy??! I did not like it sitting on my bedside table when I went to bed... it's too scary.
My Rating: 3.5-4 out of 5 stars
Posted by KC at 8/17/2011 04:16:00 PM 2 comments: 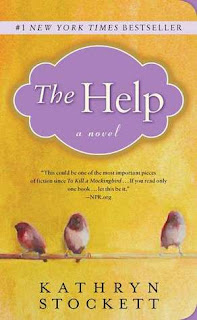 Synopsis:
Aibileen is a black maid in 1962 Jackson, Mississippi, who's always taken orders quietly, but lately she's unable to hold her bitterness back. Her friend Minny has never held her tongue but now must somehow keep secrets about her employer that leave her speechless. White socialite Skeeter just graduated college. She's full of ambition, but without a husband, she's considered a failure. Together, these seemingly different women join together to write a tell-all book about work as a black maid in the South, that could forever alter their destinies and the life of a small town...
My Review:
Wow! I know I mentioned once before that I normally don't read the big bestsellers right away because I think a lot of times books can be hyped up too much. But this book deserves all the hype it can get. I found The Help to be wonderful, inspiring, funny, scary, and a great read.
Its 1962 and 'Skeeter' Phelan just graduated and moved back home to a criticizing mother and no husband or boyfriend. But Skeeter has dreams of being a writer... which leads her eventually to the idea of writing about the help, the colored women who work for the rich white women in Jackson, Mississippi. The social rights movement is beginning to get off the ground and Skeeter gets a little positive feedback from an editor at a publishing company in New York City for her idea.
Skeeter is young though and doesn't realize how difficult it will be to get the maids to talk to her. She will have to cross the color line, and when she does, she'll begin to understand just how dangerous the territory is that she has entered.
Aibileen, the first colored maid that Skeeter befriends is a wonderful woman and my favorite character. She is wise and loving, which is apparent in the care she shows for the little white girl that she cares for in her job.
The maids stories are wonderful and sad. I think Kathryn Stockett did a great job portraying the early 1960s in the south. I don't want to give any more away... so go ahead- believe the hype and read The Help.
My Rating: 5 out of 5 stars
Posted by KC at 8/03/2011 08:30:00 PM 2 comments: 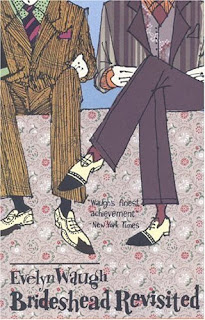 Synopsis:
The most nostalgic and reflective of Evelyn Waugh's novels, "Brideshead Revisited" looks back to the golden age before the Second World War. It tells the story of Charles Ryder's infatuation with the Marchmains and the rapidly-disappearing world of privilege they inhabit. Enchanted first by Sebastian at Oxford, then by his doomed Catholic family, in particular his remote sister, Julia, Charles comes finally to recognize only his spiritual and social distance from them.


My Review:
I have very mixed feelings about Evelyn Waugh's Brideshead Revisited. On one hand, the writing, especially in the beginning, is too dense and flowery which makes it hard to get into and the characters have few redeeming qualities. However, the writing is also beautiful at moments and the characters grow on me so that I begin to care about what happens to them.

Brideshead Revisited is about Charles Ryder's reflections on his youth (college years). His memoir starts because his military unit is stationed at the former house of his college friend, Sebastian Marchmain. In his first year at Oxford, Charles meets Sebastian, an unusual fellow who carries around a teddy bear called Aloysius. Sebastian's family represents the rich and luxurious life of the slowly decaying privileged class in England.

Sebastian does not like his family or feeling like anyone is trying to control him, so as Charles becomes more familiar with his family, Sebastian turns to alcohol to give him relief. Charles and Sebastian's relation at Oxford starts at an extreme high. Although it's never directly stated, their relationship has a very homosexual feeling to it. While reading about it, I felt really uncomfortable because I didn't know if it they were actually gay or if I was just reading too much into. I really wish that Waugh had been a little more direct about what they were to each other. I think there's strong evidence for Charles being homosexual since he had an affair with Julie, Sebastian's sister, and his main attraction to her seems to be that she bears a strong physical resemblance to Sebastian.

Another big theme in Brideshead Revisited was the role of religion, particularly Catholicism. The Marchmain family is steeped in Catholicism, which may be what led to Sebastians alcoholism. He may have had strong feelings of guilt if he did have homosexual tendencies. Their religion affects all the members of the Marchmain family at some point during the book, even though many confess to being agnostic or atheist earlier.

There were some beautifully written parts of the book and I grew to care about some of the characters. However, I thought a lot of them seemed shallow and I wanted to know more about them and what they were thinking, rather than just seeing their actions, so that I could relate to them and like them more. This is the first book by Waugh that I have read, I'm not sure if I will read more or not.